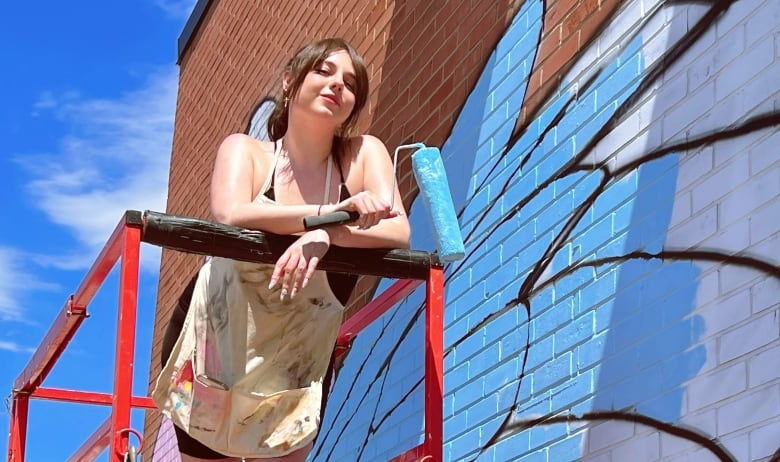 In Making a Living, we talk to artists and creatives about all things money — how they make it, how to support an artistic practice when you still have a day job, and how to handle things like taxes and slow periods when you’re doing it full-time.

At first glance, Sugarbones’ drawings have a sweetness to them: big-eyed, pastel-coloured female cartoon figures in a style that’s a little bit Sailor Moon, a little bit My Little Pony. But a closer look shows that they’re much less sweet than you thought: clowns telling you to “text your ex,” a tribute to Florence Pugh as Dani the May Queen in Midsommar, a pixie-like Medusa, sitting on a man turned to stone.

“Coming out of art school, I had this idea that I wanted to make and sell my own products as an independent artist rather than working for somebody else,” she says. “I didn’t want to do graphic design or something like that, where I would have to do a lot of client work.”

Eight years later, Sugarbones has an Instagram following of over 157,00, and is selling hundreds of thousands of dollars worth of pins, stickers, accessories, and even bottle openers, all done in her distinct style that mixes what she describes as a “cutesy” feminine aesthetic with a sharp, aggressive energy. She’s planning on launching a clothing line next year.

We talked to her about how she got her start, the challenges of finding time to do art “for fun” when art becomes your business, and her advice for people who want to try and follow in her footsteps.

So what is it you do?

I like to consider myself an artist and designer.

How would you describe your style?

I describe my style as a mixture between cute and edgy. I like very feminine colours — very cutesy things — a lot of bows, sparkles, stuff like that, but then I always have a punch to my work as well, like candy hearts that say “GO AWAY” and “DROP DEAD” —  that sort of thing. I like incorporating humour into my work. My friends always say that “cheeky” is a good word.

Is this a full-time living for you right now?

Yeah, I’ve been doing this full-time for, I think six years?

How much are you making? Like what’s a good month?

I have a subscription service, a pin club, and I can make anywhere between $15,000 to $20,000 a month through that, plus whatever comes through my store.

Is that revenue or profit?

What are your expenses?

Production of the products themselves. I have a few different people I work with, in Canada, the U.S.A., and overseas. And then any form of freebies, like stickers, and tissue paper and packaging.

What made you realize you could do this full-time?

I was a barista at the time, and I was making more money [as Sugarbones] than I was making at my job as a barista. I would be spending my time at the job, on like a slow hour, drawing and thinking of ideas for my business. Then when I would come home, I would be so tired, I could barely get anything done.

So it kind of put me in that position where I was like, “OK should I give this 100 percent?” Because I was younger at the time, too, I kind of just thought, “Hey, there’s going to be other barista jobs out there. I can always reapply if this really doesn’t work out.” It wasn’t like I was working a full-time job as, like, a doctor.

Do you think that being in a city like Hamilton, that was a little less expensive — at least at the time — made you more able to turn your art into a business than if you’d lived in Toronto or Vancouver?

Living in an area where your needs are more [easily] met, I think it gives you the opportunity to move into the arts or take a chance, like starting a small business. Especially in that first year or so, where you don’t know if you’re going to make it or not.

I think that [it was] also because Hamilton is primarily an art city. We have Art Crawl which happens on the second Friday of every month — it’s basically like a giant free art festival on the street where you can set up a booth anywhere and sell your stuff. I don’t think that Toronto has anything like that, where it’s completely free and run by the community. So I owe that a lot too, [when I was] starting to sell my work and starting to build up my audience, especially locally.

You have a massive social following. How did you build that?

I was really lucky to have built it a long time ago, before everything on the internet completely changed. The internet seemed smaller; social media was more directed toward the people that you follow, rather than constantly churning out content like how it is today.

I started maybe seven years ago, posting on Tumblr and Instagram. And then [my following] kind of just grew from people buying my stuff and sharing it online and then people following me through there. The algorithm is hurting everybody right now.

Do you feel beholden to the algorithm?

More now than ever. I used to rely on Instagram a lot, and I think that that’s the platform that changed the most. They’ve made all those changes recently, trying to be more like TikTok. They continuously show you more content and your feed is full of stuff that you don’t follow.

The way that I kind of deal with it is I try to really engage with those people that engage with me, and kind of build that trust and that following through a one-on-one kind of relationship. I don’t have a social media coordinator — I run this myself — so I feel like it’s more personal in that sense. I can answer like a person and not so much like a customer service rep.

You just did a mural for the Concrete Canvas festival in Hamilton. How do you keep space for doing projects like that, projects that aren’t part of your business?

It’s tough. What I really have focused on is slowing myself down. When I first started, I used to try to pump out as much as I possibly could. And then I would always face a burnout that was really destructive to my creativity. Like, I would just completely pull a blank and then it was just hard to get back into it. [Now] I’m lucky enough to be in that position where I don’t feel like I have to churn out as much.

What advice do you have for other artists trying to sell their work in the way you do?

Become as informed as you possibly can. When I was starting out, there was like, no information out there. There weren’t a lot of YouTube channels going over what you need to do, how to get stuff manufactured. It was really me just trying to figure it out myself through other artists.

The other thing is for people to find what they love to do. I think that it’s important to create work that you love because that’s what’s going to keep you passionate about it. It sounds cliché, but if you find what you love to do and you give it your all, people online will eventually begin to follow you and they’ll find you, and it’ll negate the chances of you running into burnout.

Answers have been edited for length and clarity. If you’re an artist who wants to talk money for Making a Living, email [email protected]

The Most Common Misconceptions About Art Galleries

When Do I Need a Model Release Form? (Plus a free sample!)